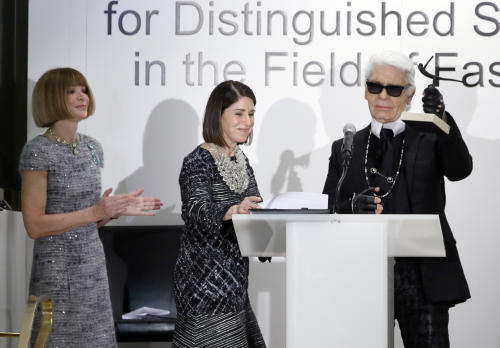 The Award for Distinguished Service in the Field of Fashion, was also presented to his predecessor, Coco Chanel in 1957, directly from the hands of Stanley Marcus in Dallas.

Stanley Marcus, son of of the store’s co-founders, established the award in 1938 and awarded it yearly trough the 1960s and intermittently thereafter. Marcus himself was awarded in 1995… Grace Kelly, Miuccia Prada, Bill Blass, Elsa Schiaparelli, were among other recipients.

Lagerfeld already won the award in 1980 for his contribution to fashion house Chloe and is the only person who accepted the honor twice. What a great end to most memorable week of his Dallas experience….